A downloadable game for Windows

Tape is a horror game telling story about a pizza delivery girl who had a delivery order to a haunted house, and her journey inside the haunted house was recorded inside a vhs tape

Hey Wolfgas. This was one of our favorite games of the whole month so we decided to go back for more!

Thanks again for the game!

A super creepy game that ramps up the weird factor almost instantly!

The game has a nice retro console feel in terms of aesthetics and brings back the old school memories of lower poly horrors and also there is some very disturbing imagery in this game that makes you feel very uneasy.

The ambient sounds are very disturbing and only get much worse as you discover more hearts located deep inside the house along side the other random events that occur.

Overall a very strange and quite frightening game this was really well done and a really good recipe for a spine tingling playthrough, it will be really interesting to see what other freaky horrors this creator makes, if this is anything to go by the next ones will only be more horrifying!

I liked the film effects but I feel the "fog of war" was a bit extra. Was the voice acting intentionally low quality like that? The cheap jumpscare on "retry" is kind of obnoxious though....

I played your game as part of a 3 random horror games video, and I've got to say, it was super creepy.

I'm not exactly sure what it was about the game that creeped me out so much, but I couldn't even finish it (probably because I suck at games where you have to hide)

But, all in all, a great and scary experience, great work!

Honestly a pretty terrifying experience, it was so confusing to understand what was going on, but the objectives were clear to me at least. Enjoy the video I made about it!

Someone still using VHS in 2020 almost deserves an acid trip through a haunted house!

Honestly when i first saw the monster kinda moonwalk 2 inches past me without seeing me I was like oh it's one of these but about halfway through it really really got creepy...  GG's

It's so unsettling I had to pause sometimes in the middle of the game to breathe and drink some water to relax lol. Amazing!

Reply
Kodamah11 days ago
I could not finish this game, it made me so uncomfortable...as if I was falling into a deep dark spiral of severe anxiety. I don't know what Demons you worshiped to make this game...but it's apparent you need Jesus.
Reply
SHXXTZZ GAMES11 days ago

Started off a bit slow then picked up speed really quick. The different stages that happened when I retrieved the items were very weird and uncomfortable, making the game even better. My only really problem was that a lot of the time the main creature would just walk past me or entered the room I'm in without registering that I'm there.

This certainly is an experience! There's so much here to make the player uneasy and in that regard, mission accomplished!

loved the game, but I am truly cursed forever! 😂

Reply
IkuzoMundo12 days ago(+2)(-1)
So apparently there are 2 endings to this game. I got the Good one on my first try.

This game has an interesting bunch of monsters that I feel like can actually have a game for each on their own. My biggest gripe for this game is i didn't have a clear indication of how to find the hearts whilst the monster kept piling on top of me. Also, the viewing distance really made it hard to proceed, otherwise great game!

This is hands down the best horror game I have ever played. It filled me with fear like nothing has ever done before. The sounds and atmosphere made it extremely scary. The clips were extremely creepy too. I was extremely focused on the game and there was a point where I was super creeped out and got jumpscared and it made a tear come out of my eye. 5/5 stars. Im hoping to see more masterpieces from you in the future :)

This kind of game that always make me scared sh*tless,and the ambience and Ai are well made.i got a little issue about the Ai pattern of patrolling the area always the same so i got stuck at 1 area.but critic's aside this still 1 of the best horror i played this year.  cuz,u can see me lose my mind playing this!!!!!  (Count how many times i said freak :v)

Really well done game! I got super close but honestly got too scared to try again lol This was the first game in the video

Reply
M4RKTH4SL4YER16 days ago
THIS GAME HAD ME SCREAMING LIKE AN UNDERAGE GIRL RUNNING FROM A PEDOPHILE!!! AMAZING GAMEPLAY
Reply
GeninMyles17 days ago

This game scared the absolute life out of me! As soon as I heard the footsteps, I almost died! Very well done!

https://youtu.be/MLJnU5Jnj0A absolutely loved the game! The atmosphere and the video samples really added confusion and a feeling of helplessness. The disorienting music also was utilized pretty well. Keep it up!

THIS GAME SCARED THE MESS OUTTA ME! DON'T WATCH ALONE I BEG OF YOU! HoodiTrev

Dani : Wow that was really cool.

right guys :D. i would also make a horror game some day

Reply
kevallstar7218 days ago
NIGHTMARES!!!! IT TOOK ME 2 HOURS TO FINISH THIS GAME BUT great game
Reply
GrittGaming18 days ago

Just played this game and WOW it's creepy. Hear's my attempted playthrough

I didn't expect for any of this to happen... This game went from me being some average little Asian girl delivery pizza to being stuck in a haunted house filled with disturbing frights and a demon who chases you in between the scares. This game had a little twist to it, but I won't spoil that for you :)

The SPOOKS are real with this one! haha I love it, multiple jump scares, multiple screams! This game doesn't lose its edge and become boring after several minutes deep. No, instead you're trying to stay on your toes even harder because the twisted cutscenes disorient you! Speaking of the cutscenes, I feel like they really enhanced the game. Brought it to a whole other level of darkness. My only suggestion: when running around, you can easily get stuck on objects. I don't know what it is you can do, but being able to smoothly glide thru the environment would be beneficial.

I really really liked this one... actually I don't know if I liked it. :D

It has an absolute amazing atmosphere.
I liked the environment, it was really tight and the hallways were really scary. You not being able to see anything 5 metres in front of you makes this game really terrifying.
I also liked the graphics style, was pretty cool.
The sounds were alright but what got me the most were those real life videos/pictures... with that one guy shaking his head weirdly at the train station and all the others aswell. I did not expect that at all since it's a pixel game but it was really well implemented! I was really scared of going out of the rooms and it was just disturbing and making me feel really really uncomfortable. And when I died for whatever reason and wanted to press "Replay" I got jumpscared SO hard I threw my headset away and that literally never happened. Also that first jumpscare where they hand came flying towards you was pretty good too!

The monster design was kinda meh (the one who was walking around) but maybe it's also just the silly animation that it had.
There is a bug: You can't go up the stairs sideways (using key A or D), you will get really really slow and it would take you literally minutes to get up. So you have to look forward and press W when going up the stairs. Not gamebreaking but worth mentioning.
The voice acting is okay, it was cute ^^
The biggest problem of this game is that you can not tell if the heart sounds (or even the step sounds of the monster) comes from upstairs or downstairs... so it's kind of annoying and frustrating when you look for the heart downstairs but realise it's actually upstairs or when you don't know where the monster is (that's literally why I died, I got out of the "deamon world" and the monster was right in front of me).

I didn't fully finish the game and after the second try I just gave up because it was too terrifying and I didn't want to see that uncomfortable footage again. That was literally the worst (best) part of the game. 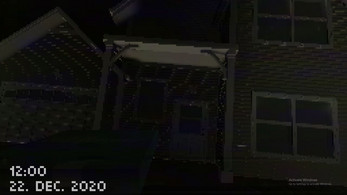 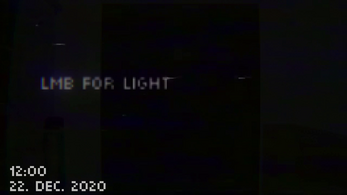 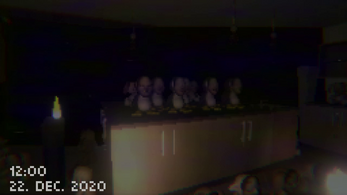 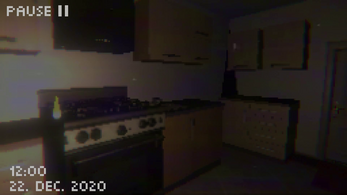